So it’s been a little bit quiet on the Unity posts, and for good reason! Just finished up 2 new things: Our Custom Coroutines System and Player Auto Move System!

So before, we tested out using standard Unity coroutines, which are powerful and cool, but a little hard to work with, especially in an online game where you need to start / stop them on demand. So now we have our own custom coroutine system which has all the benefits of using coroutines, with the added benefit of complete control over them.

Coroutines are awesome because they allow you to craft sequences of events with minimal amount of code that would be very complicated ( if not impossible )  to do in a traditional sense.

I also wrote a Maya mel script to read the motion of the animated character in Maya and have it generate a “velocity readout” that we pipe into Unity and use for moving the character when they are attacking. This means we can animate the character in Maya doing whatever we want, with exact foot placement, then let Unity actually move it the same way in game. 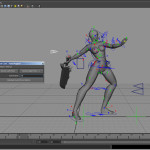 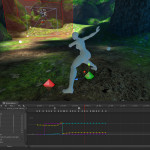